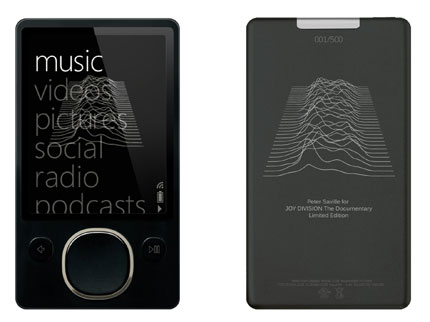 On June 17, Zune will release a limited edition, Joy Division-themed 80GB media player designed by legendary Factory Records artist Peter Saville and we’ve got the exclusive, never-before-seen photo of the special device, pictured above. Click here for a larger image.

The Zune player, which utilizes an adaptation of Saville’s artwork for Joy Division’s Unknown Pleasures, will honor the DVD release of Joy Division, a much-anticipated documentary chronicling the life of the influential but short-lived Brit post-punkers. The film will be preloaded into the special edition player.

The 80GB Joy Division player — only 500 of whom will be sold — will retail for $399, and will be available through zuneoriginals.net.

“Joy Division and Peter Saville share a story full of innovation,” Tom Atencio, producer of the Joy Division documentary, told SPIN.com. “The band made history with their pioneering digital music. Peter Saville placed the music and the band in a visual context equally as innovative. It is completely in character for the film to be a debut Zune preload.”

“Zune’s involvement with the Joy Division documentary is a way of saying ‘Thank You’ to the band for doing what they did, and is not only a tribute to them but to an entire musical journey through Factory Records and the artists and movements it spawned,” Chris Stephenson, GM Global Marketing, Zune, told SPIN.com. “It’s a tribute to deep respect for graphic design that lives on through artists like Peter Saville, and to independent film-makers that believe in more than just commercial success. Ultimately it’s a tribute to the self-belief and self-expression that inspires true authentic art.”