The world's biggest band begin the first of three free shows around the world in support of Viva La Vida, out today in the U.S. 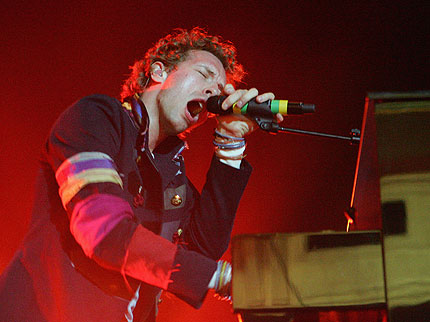 It’s been a momentous week for Coldplay in the U.K. They’ve sold 300,000 copies of their new album, Viva La Vida, in just three days, but a seemingly anxiety-wrecked Chris Martin has stormed out (albeit politely) of two press interviews. And while much of the British media are hailing their return with only mild encouragement (despite some positive notices in the U.S.), the rest are busy proclaiming them the very worst thing to happen to rock music in years. Even Martin himself has been at it. “We’re the world’s biggest bland,” he quipped recently.

But if Jay-Z’s most famously sensitive homie is genuinely rattled by the extent of the column inches he now commands, he shows no immediately outward signs of it tonight. Here in London, Coldplay are about to commence the first of three free shows they will stage over the next week (Barcelona and New York to follow), and the 5,000-capacity Brixton Academy is rammed with fans palpably grateful to be here.

They enter the stage dressed in the kind of military garb you fancy My Chemical Romance would approve of, and immediately burst into new single “Violet Hill,” a wonderfully vigorous affair that sends the singer on an unsteady dancing march around the floor’s myriad guitar leads. “Violet Hill” is indicative of many (if not all) of the Viva La Vida songs they air tonight, sounding far bolder in a live setting than it does on record. And though, elsewhere, “Strawberry Swing,” “42,” and “Lost!” never quite shake their politely decorous meanderings, the title track is a colossal thing that boosts the blood pressure and, encouragingly, receives a reaction every bit as rapturous as for either “Clocks” or “Trouble.”

But for a band that has sold 30 million records, it is the hits that prompted such sales that are most greedily embraced. “In My Place” still chimes with the skyscraping resonance that prompted all those “new U2″ claims, and a banjo-assisted “Yellow” — played as an encore from the first-floor balcony — remains a thing of rare beauty.

And then comes “Fix You,” perhaps the most studiously manipulative stadium anthem of its generation, but also very likely the best, and the perfect example of why Coldplay can touch so many people as they sometimes so effortlessly do.

Life in Technicolor
Violet Hill
Clocks
In My Place
Viva La Vida
Chinese Sleep Chant
God Put a Smile Upon Your Face
42
Square One
Trouble
Lost!
Strawberry Swing
Yellow
If I Should Fall From Grace With God
Fix You
Lovers In Japan