The Canadian twins chit-chat their way through a solid Friday set. 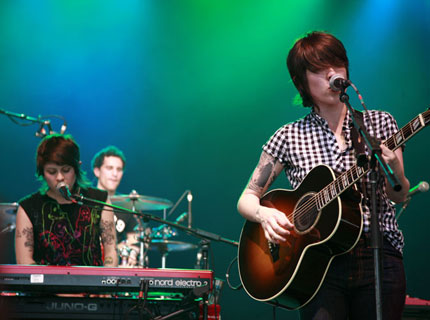 By the time Canadian duo Tegan and Sara launched into catchy hit “Walking With the Ghost” a few songs into their afternoon set at Bonnaroo on Friday, not only was the entire crowd singing along but they were understandably enraptured with the musicians. “I am dressed completely inappropriately for this heat,” Sara said during some of the pair’s notorious — and notoriously funny — stage banter, commenting on her tight jeans and button-up shirt. “I saw someone last night wearing a wool ski hat, which was worse though.”

Despite the heavy heat inside This Tent, Tegan and Sara seemed remarkably cool as they sped through a lengthy list of old and new hits, highlights including “Back In Your Head” and “Nineteen” from last year’s The Con, pausing frequently to comment on the weather, recount a childhood tale about Sara telling their mom to “Fuck off” and being chased around the house for 45 minutes, and introduce their three backing bandmates before predictably closing the set with old favorite “Living Room.”