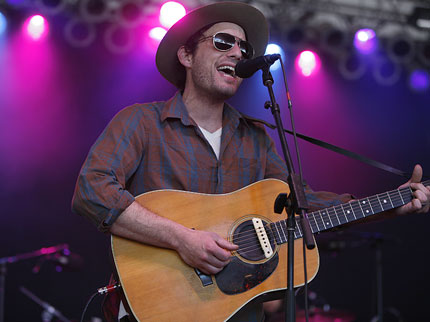 Jakob Dylan and the Gold Mountain Rebels, which includes Nashville-based guitarist Audley Freed and drummer Fred Eltringham, appeared during the height of Sunday’s heat wave and attempted to cool things down at Bonnaroo’s This Tent.

“I hear the weather is nice this time of year,” he quipped. “Apparently it gets a lot worse.” From there, Dylan performed a solid, if not entirely memorable set composed mostly of material from his debut solo album, Seeing Things, plus a few highlights from his days with the Wallflowers, including “Three Marlenas,” which drew some of the show’s heaviest applause.

Check out more from Bonnaroo ’08! and see what the fans thought of Jakob’s set in the video clip below: