The Georgia-born songstress ditches her once characteristic onstage meltdowns for a steady, cool sip of the Southern blues. 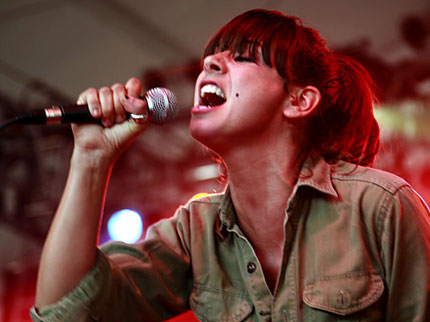 Mostly mum between songs, Marshall, whose audience included the Olsen Twins, was clad in jeans and a long-sleeved button-down, even garnering a flurry of whistles from the crowd’s male populace when she lifted her shirt for cooling purposes. Meanwhile, her tight four-piece band took the temps in stride, gracefully sliding through sparse, jazzy cuts off 2006’s The Greatest, including the record’s pensive title track, plus covers of the Hot Boys’ “I Feel” and Creedence’s “Fortunate Son” as Marshall’s ethereal voice delivered.

As the show ended, the musician-cum-model emerged to shower her audience with white flowers, capping an excellent, smooth set and proving this once rambunctious meltdown-in-the-waiting has matured with her music and fans acting as the beneficiaries.

Check out more from Bonnaroo ’08!, and watch the video below for fan reactions to Cat Power’s set.