The seasoned Los Angeles-based singer/songwriter rewards "Bonnaroo warriors" with a spot-on, graceful set at the Other Tent Sunday afternoon. 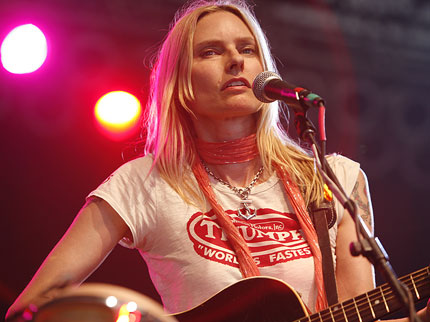 “You guys are warriors, Bonnaroo warriors,” Aimee Mann praised to her now filthy, exhausted, and sun-suffering fans crowding the shady areas beneath the Other Tent Sunday afternoon for the singer/songwriter’s much-anticipated set. And war was worth the fight; Mann, armed with a vast back catalogue plus tunes off her excellent new album @#%&! Smilers, offered the comfort and grace many concertgoers were seeking, especially in the festival’s 25th-hour, mud-crust plastered to legs and tangles of hair unwillingly forming dreadlocks.

Opening with the swaying bass and swelling keys of “Stranger into Starman,” Mann’s set was chock full of sing-along moments, all tender, all catchy with soft, windswept countrified verses and unforgettable choruses. Stating, “This song lost a Grammy to Phil Collins,” Mann dove into the tender “Save Me,” off the Magnolia soundtrack, before plucking out a cover of heart-wrenching standard “One.”

Following the piano-driven ballad “4th of July,” fans fended off imposing exhaust and sang along as Mann fired, “I thought my life would be different somehow,” while bluesy keys trotted to “Thirty-One Today.” For many concertgoers, the four-day Bonnaroo war had been fought, and it was now won with Mann’s set.