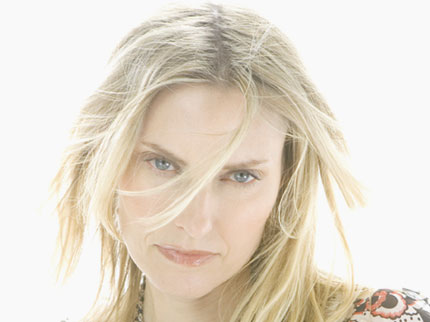 What?Heartbreak chatter, specifically stories told about our last doomed relationship (and the exes that remain on our couches), sound like lyrics penned by Aimee Mann — caustic, clever, with a pervading undercurrent of thoughtful sensitivity. The flaxen-haired college dropout first gained notoriety in the mid ’80’s fronting new wavers ‘Til Tuesday, spouting lyrics inspired by former bandmate/lover Michael Hausman (including mega hit “Voices Carry.”) And after contributing to filmmaker Paul Thomas Anderson’s Magnolia soundtrack and releasing many a solo album, including Bachelor No. 2, Lost In Space, and The Forgotten Arm,Mann returns this week with @#%&*! Smilers.

With guest cameos from singer/songwriter Grant-Lee Phillips and novelist Dave Eggers (he whistles on “Little Tornado”), Smilers is another thoughtful meditation on your next life crisis, whether it’s assessing your triumphs (“Thirty One Today”) or facing the inevitable (“It’s Over”).

Who? Los Angeles-based veteran singer/songwriter Aimee Mann, who, after long-lasting struggles with David Geffen, founded SuperEgo Records in 1999 to self-distribute acclaimed full-length Bachelor No. 2. Her battles with the record industry (detailed on “Calling It Quits”) inspired Mann’s activism with Artists Against Piracy, and to organize the United Musicians Collective, which includes Bob Mould and comedian Patton Oswalt.