The Sword Slice Into Washington, DC 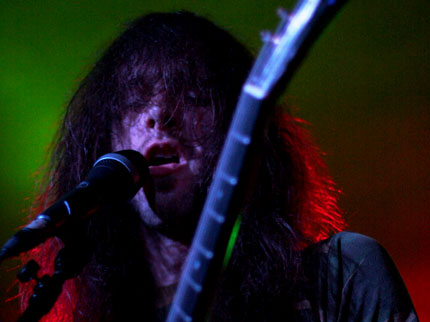 Doom flooded the nation’s capital last night (May 15), and its name was the Sword. After a blistering set from fan favorite Torche (and local-band-makes-loud, Stinking Lizaveta) the Rock and Roll Hotel was bursting at the seams, ready to be swallowed whole in a sea of pounding rock. And as the clock struck midnight, the Austin, TX-based doom-metal quartet stormed onto the stage to a sold out crowd.

The wall of sound was thick and the riffs bludgeoning as the four long-haired rockers whipped through tracks off their 2006 debut Age of Winters, before focusing on sharp cuts like “The Black River” from their sophomore release Gods of the Earth. With one hand on a stiff drink, and the other thrusting in the air, fans head-banged and engaged the sound’s urgency as the quartet tore through face-smashing renditions of “The Frost-Giant’s Daughter” and “Maiden, Mother & Crone.”

The Sword took charge, took names, and sent everyone home with a smile smeared across their face — and surely a whiplashed neck.

Also on SPIN.com:
Watch the video for the Sword’s “Fire Lances of the Ancient Hyperzephyrians”

We asked: The Sword’s music has been featured in both television shows and video games.If you were an executive at either, what show or game would you place their music in?

Jason M Williams
Tags: We Were There