Syracuse, NY's indie-pop quintet emerge from the studio and prep The Rhumb Line for summer arrival. 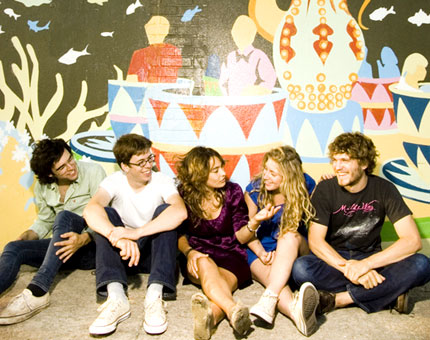 After the 2007 release of their buzz-worthy self-titled EP, an exhaustive touring regiment, a devastating loss, and a lengthy stint in the studio with producer Ryan Hadlock (the Gossip, Blonde Redhead, Islands), Ra Ra Riot have finally unveiled The Rhumb Line, their debut full-length record out Aug. 19.

Joining the likes of Nada Surf and Mates of State at Seattle’s Barsuk for the release, Ra Ra Riot, on the heels of an 80-plus date tour in early ’08, will unveil new tracks live this summer with a handful of gigs, including stops at Milwaukee’s Summerfest and Chicago’s Wicker Park Festival.

And though a tracklisting has yet-to-be unveiled, the band leaked a few details to SPIN.com in a video interview this past March at SXSW, immediately after performing a rare, exclusive rendition of EP and full-length gem, “Dying is Fine.” Check out both below!