Television's Richard Lloyd, the Misfits' Bobby Steele, Jesse Malin and many, many more celebrate the late rocker's 57th birthday at the Fillmore East. 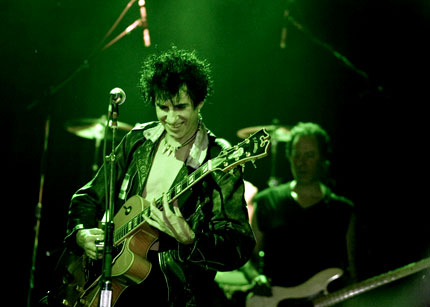 With the sheer number of punk icons on hand last night (May 19) at New York City’s Fillmore East, the 8th annual posthumous soiree for Ramones legend Joey Ramone proved to be simultaneously surreal and disorienting, pulling fans through a labyrinthine genre museum, then backhanding with fresh cuts and pure downtown bravado. And combined, it was an all-around birthday bash of punk rock proportions!

Local H kicked things off with a rendition of the Ramones’ “I Just Want to Have Something To Do,” paying homage to the man of the night with snappy vocal shots and chugging, power-chord guitars. And from there it was a barrage of celebratory tunes; renowned VJ and one of the show’s hosts, Matt Pinfield, then introduced New York’s own Semi-Precious Weapons, whose frontman Justin Precious poured his personality onto the audience in a glam-punk orgy of androgyny, before fan favorite Handsome Dick Manitoba, frontman of proto-punkers the Dictators, led his band Wild Kingdom through a set of sludgy rockers, including fist-pumper “The Party Starts Now!”

Shangri-La Mary Weiss performed a rigorous list of girl group classics as well as giving a taste of material off her latest album, Dangerous Game. But Joe McGinty of the Psychedelic Furs’ keyboard performance on teenage melodrama “Leader of the Pack” was the talismanic moment of the night.

Among other famed stalwarts paying respects were Misfit Bobby Steele, designer of the original Ramones logo Arturo Vega, and Trash and Vaudeville’s Jimmy Webb, the man responsible for dressing scores of punked-out, leather-sporting New Yorkers, as well as the mind behind the first punk boutique in the U.S.A.

It was an intimate night with just as many VIPs as crowd members, all hooting and hollering as the event closed with Joey Ramone’s brother Mickey Leigh who, along with the help of genre gods Bobby Steele (Misfits), Richard Lloyd (Television), Ivan Julian (Richard Hell and the Voidoids), and Jesse Malin, trumpeted through a set of Ramones classics like “Chinese Rock,” “Blitzkrieg Bop,” and “I Want You Around.” Bagpipers led a droning, final “Happy Birthday” sing-along, and for its 8th year in a row, Joey’s Birthday Bash came to an end, proving it still caters to dedicated fans and friends alike, still remembers Joey Ramone’s undying legacy, and is still punk as fuck!

We asked: If he were still here today, what would you bring Joey Ramone as a birthday gift?

We asked: If he were still here today, what would you bring Joey Ramone as a birthday gift?

Mary Weiss of the Shangri-Las / Photo by Jackie Roman

Sean Yeaton
Tags: We Were There