The Canadian post-punk wunderkinds flaunt influences, comment on growing young, and spread the word all over town -- listen up! 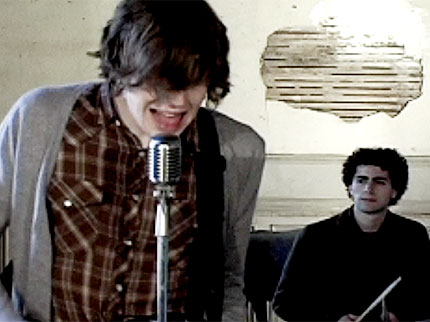 “Every single step I grow another second young… all my hair grows in, wrinkles leave my skin,” sings Tokyo Police Club’s vocalist/bassist Dave Monks in the new music video for “In a Cave,” an affirming post-punk rocker off the band’s much-anticipated debut full-length Elephant Shell. And though it’s odd for a frontman so young (just 21 years old) to confront age, he wants to tell you all about it — no really, he does. And in the half-performance half-treatment new video, Monks not only wants shout it aloud in song, but spread the word via tin can phone.

As the band rocks away in an old Victorian-era house, Monk channeling his best Morrissey-meets-New-Order delivery atop sleek, punk guitars, cans, or keg cups rather, develop a life of their own and venture out — ahem, string attached — to loop in select bystanders on what’s going down back at the pad. Some are disinterested, others listen up, and ultimately the cups return home. Message dispersed, job well done — this journalist is listening closely.