New Video: Flight of the Conchords, “Ladies of the World”

In the Kiwi duo's new music video, Bret and Jemaine discover the cure to all their lady troubles: roller skates! 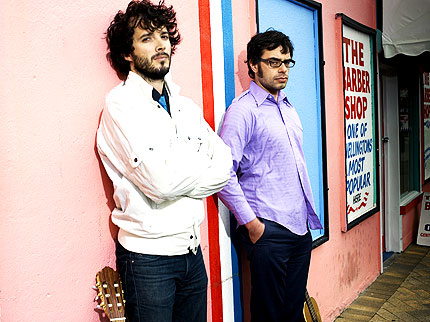 It’s man’s longstanding question: “How does that dude get the girls?” Well, in the new music video for “Ladies of the World,” Flight of the Conchords’ groovy, acoustic jam that thanks all girls across the earth, Kiwi duo Bret McKenzie and Jemaine Clement find the answer: “Women love the roller skates,” Jemaine realizes. “It’s the rhythm of the movement of the feel of the wheel of the rhythm of the feeling!”

Morphing into a pair of slick, circa late 1970s roller pros, the pair hit the beach in their freshly acquired fantasy skates and silly, era-specific duds, and kiss their women troubles goodbye, as the ladies of the world — “Bolivian, Namibian… amphibian, Presbyterian,” and, quite graphically, hermaphrodite — flock in their direction. Why? The skates. And truth be told — as seen in the video! — McKenzie and Clement has some pretty sweet moves. Men of the world, take heed.

Now Watch This: Flight of the Conchords music video for “Ladies of the World”

More Flight of the Conchords:
— Read our interview with Bret and Jemaine in the May issue of Spin
— Grab an MP3 of “Ladies of the World” on Sub Pop’s Flight of the Conchords page
— Check out dates for the duo’s current U.S. tour
— Read Peter Gaston’s blog entry about the “involved” fans at the band’s recent NYC show