Seattle's Sub Pop heroes celebrate two decades with two records, new full-length The Lucky Ones and a re-release of 1990's Superfuzz Bigmuff, both out today. 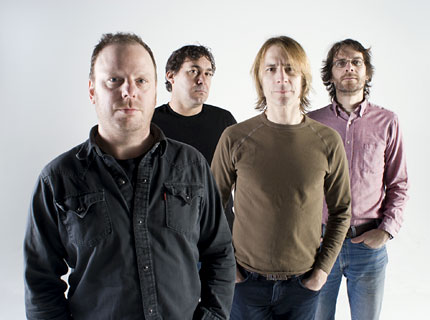 What? Sparking twenty blazing birthday candles today (May 20) are seminal grunge mainstay Mudhoney and longtime label Sub Pop Records, honoring their double-decade partnership by releasing the band’s eighth full-length album The Lucky Ones, plus a remastered deluxe-edition of 1990’s hard-hitting Superfuzz Bigmuff. Recalling their early sound, the new album sees the boys ditch sludgy, grunge traces and return to their garage-punk roots. Touches of 1991’s Every Good Boy Deserves Fudge can be heard in “And The Shimmering Lights,” while the fuzzy distortion of Mudhoney’s 1989 self-titled debut is evident elsewhere. The candles are definitely ablaze in ’08, but let’s hope Mark Arm and crew refrain from blowing them out for at least another twenty years.

Who? The current lineup of Mudhoney consists of founding member and vocalist/guitarist Mark “Arm” McLaughlin, who took the “Arm” moniker as an absurdist joke referring to people as body parts, plus guitarist Steve Turner, drummer Dan Peters, and bassist Guy Maddison.

Fun Fact: Although the quartet expected to spend more time in their Seattle studio, all recording efforts for The Lucky Ones were completed in only three and a half days, thus maintaining the heavy rawness Mudhoney is notorious for.