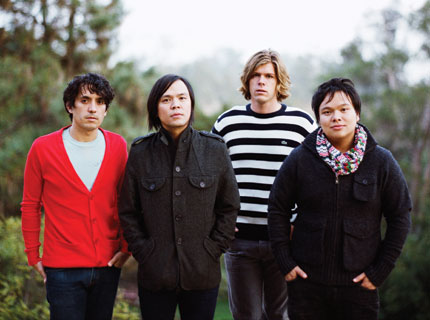 The Little Ones play a perky brand of blue-skies indie pop that sounds like a retrofitted blast from California’s endless-summer past. Behind frontman Ed Reyes’ friendly-dude demeanor, however, lurk the beginnings of a cranky old man.

“I was totally anti-MySpace until the beginning of 2006,” Reyes says, downing beers with his bassist brother Brian and guitarist Ian Moreno at a grungy dive down the street from his house in Los Angeles’ musician-besotted Silver Lake neighborhood. Reyes blames the Luddite attitude on his former day job in a major-label A&R department, which entailed scanning countless “terrible-looking” MySpace profiles for acts to bring to his boss’ attention. But a year into the Little Ones’ existence, he caved and put up a bare-bones page. “No pictures, no music, nothing,” he says. “I woke up the next morning, and there were ten or 12 kids wanting to be our friends. I was like, ‘Okay, I give in!’ “

The band went on to sell all 2,800 copies of a self-released EP — including 100 that Reyes shipped to London’s venerable Rough Trade shop — and signed to Astralwerks, recording Morning Tide, a bright-and-shiny charmer that might be the giddiest thing you’ll hear all year. If you get to hear it this year: In February, Astralwerks dropped the Little Ones as a result of corporate restructuring at parent company EMI. “It’s disappointing,” Reyes admits, before adding that his experience in the major-label machine prepared him for such a turn of events. “Smaller bands are usually the first ones to go.”

While they weigh their options, the Little Ones — who also include keyboardist Lee LaDouceur and drummer David Esau — have just issued a new EP on their own. Several labels have expressed interest in signing the group, but Reyes says he’d be just as happy resuming his self-employed ways.

That’s not surprising, given Reyes and his bandmates’ “positive outlook on life.” Earnest and unironic to the core, the Little Ones stand out in Silver Lake’s sulky indie scene; for Reyes, cheering up fans is more important than impressing peers: “I just like the idea that you can get into somebody’s head and sway their mood.”

Mikael Wood
Tags: morning tide, The Little Ones, This Is Happening