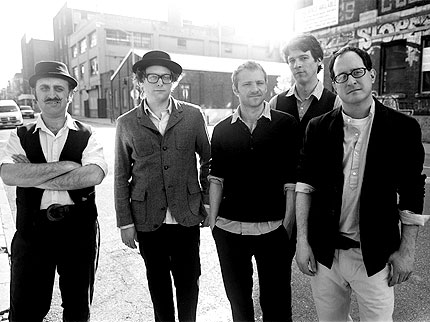 In support of their fourth studio full-length, Stay Positive, out July 15 via Vagrant, Brooklyn-based rockers the Hold Steady have mapped a spattering of nationwide dates, kicking off with a gig in Chula Vista, CA June 8. From there, it’s nearly two solid months of touring for the quintet, including stops at Seattle’s Capitol Hill Block Party and Brooklyn’s McCarren Park Pool.

Paramore, Band of Horses, the Black Keys, All-American Rejects, Sons & Daughters, and Estelle have been added to the already impressive bill for Seattle’s 38th annual Bumbershoot Music and Arts Festival, slated to hit the Emerald City over Labor Day Weekend, Aug. 30 – Sept. 1. Additional performing acts will be announced in the coming weeks. [Via NME.com]

Prolific solo artist and onetime Velvet Underground frontman Lou Reed, like Ramones stickman Marky Ramone before him, has taken up residence on the extraterrestrial airwaves with his very own show on SIRIUS satellite radio. Saturday May 17 at 6 P.M., tune in to channel 70, entitled SIRIUS Disorder, for the inaugural edition of Lou Reed’s New York Shuffle, which the seasoned rocker seems quite excited for.

“For years, I’ve always been a fan of eclectic radio, such as FM radio in the past when you could hear stations play widely divergent music, ranging from rock to country to jazz to opera. I loved the days when DJs who did their own programming set the bar high. I learned from these DJs and it’s a delight, with my friend Hal Willner [producer], to do this type of radio today on SIRIUS. We will try to bring SIRIUS’ listeners audio from all parts of the world that covers the whole musical spectrum.”