This hippy dippy South Carolina six-piece, riders on the Beach Boys' melodious surfin' safari, wowed us at SXSW, and their debut is finally out. 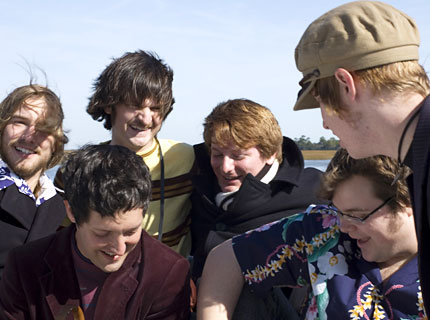 What’s the Deal? The Explorers Club ditch the coal-ridden hills of South Carolina for sunny 1960s SoCal, offering a sound as quintessentially Venice Beach as a Woodie hugging the curves of the PCH. With Jason Brewer’s sailing falsetto poised atop layers of melodious, interchanging backing vocals and plenty of eclectic instrumentation to boot, the band rightly deserve an immediate throwback reference to the Beach Boys. The choogling piano of opener “Forever” and bubble-gum melodrama of “Do You Love Me” (download MP3) and its driving, soaring chorus only add weight to this argument. But has anyone really done the Beach Boys justice lately? Answer: No, until now.

Who? The Explorers Club includes singer/songwriter Brewer, multi-instrumentalists/vocalists James Faust and David Ellis, drummer Neil Thomas, bassist/vocalist Wally Reddington, and keyboardist Stefan Rogenmoser. We caught the band churning out catchy, glistening layers of ohhhs and ahhhs at SXSW and loved it, especially when they covered Chuck Berry’s “Johnny B. Goode.” Their debut, Freedom Wind, came out this week via Dead Oceans.

Now Hear This:
The Explorers Club, “Do You Love Me?” DOWNLOAD MP3

On the Web: The Explorers Club on MySpace