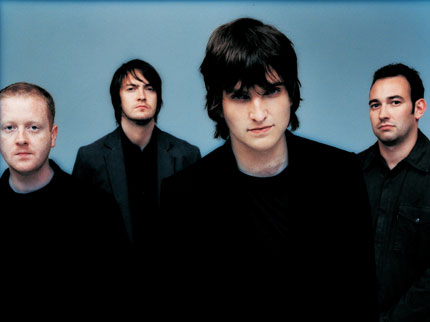 In an exclusive phone interview this week (listen below), Starsailor frontman James Walsh gave SPIN.com the inside scoop on the band’s forthcoming new album, their first since 2005’s On the Outside. Tentatively titled All the Plans or Boy in Waiting (“it’s pretty much a 50/50 split,” says Walsh), the new 11-track album will hopefully drop in September — or as soon as reconfiguring label EMI assigns it a release date.

Since the release of 2001’s debut record Love Is Here, Starsailor have been no stranger to the upper echelons of the U.K. charts, as well as to the playlists of us here at Spin HQ. But over the past three years, the band have been tucked away from the limelight — until now!

Here are the basic details Walsh shared with us about the new album. Listen to audio highlights from the interview in our player below.

– Starsailor’s new record will tentatively — label EMI withholding — release “early in September,” says Walsh. “We want make sure we’re the biggest band that’s releasing an album the week that we release it.” (:20 mark of the audio interview)

– “It’s always been called All the Plans in my head,” says Walsh. Another consideration: Boy in Waiting. “It’s pretty much a 50/50 split,” explains Walsh. Both options are also song titles. (1:25)

– Lyrically, says Walsh, “there’s a few love songs” and a “little bit of heartbreak,” as well as some political undertones, especially on “Stars and Stripes,” a tune inspired by “seeing all the flags hanging up in middle America” and “the double edged sword patriotism can create.” (2:50)

– “All the Plans,” which features the slide guitar work of the Rolling Stones’ Ronnie Wood, is an “uplifting love song” about balancing the reality of family life and “planning for the future,” and living the rock’n’roll lifestyle and “taking life as it comes.” (4:15)

– Returning to Osborne was a “natural decision,” as the band were “going back to that soulful, melodic style” of their debut record, “bringing the acoustic guitar and piano back to the forefront.” “We try to make every album a reaction to the last one, and the last album was probably our heaviest album to date. In some respects we want to do the total opposite… and let the songs speak for themselves.” (6:20)

– Due to its recent purchase, Starsailor’s label, EMI, haven’t promoted the band’s new record, or even slated a specific release date yet. “Usually it’s the record company banging the studio door down… making demands,” says Walsh. “The boot was on the other foot this time.” (7:50)