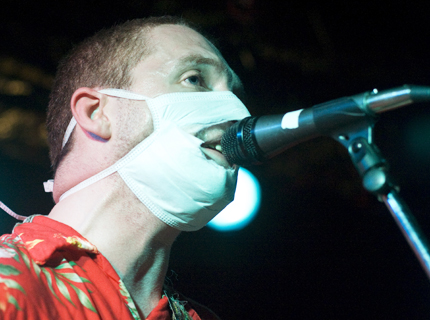 Tuesday night’s (May 13) crowd at Minneapolis’ 7th Street Entry was packed in like sardines for this long-awaited and much-anticipated showing by elusive Liverpool-based psychedelic garage-rockers Clinic. Warming the stage, Austin, TX’s Shearwater unveiled tracks from their upcoming album Rook, as former Okkervil River member Jonathan Meiburg commanded the stage with his haunting voice, that at its most transcendent channeled John Cale (Velvet Underground). Matching distorted and folky guitars, a mournful trumpet, strings, and the occasional flash of heavy metal bravado with Meiburg’s moody falsetto and dramatic crescendos, the outfit conjured an eerie, unique sound.

While Clinic’s recordings are always well executed, the subtle nuances and slow burning energy of their music is a dish best served fresh. Trading up their scrubs for some Hawaiian-themed vacation wear to go with their surgical masks, it can be difficult to connect with the band as their facial expressions are half shrouded, but ultimately it adds to the purposeful isolation of their sound. Playing their excellent, recently released album Do It! in its entirety was a seamless treat; tracks were allowed to really standout, notably the retro stomping jangle and organ drone of “High Coin,” and the fuzzed-out, slow-dance psychedelia of “Free Not Free.”

Two encores were used to showcase their more successful tracks of yore, like the signature “Walking With Thee” and its paranoid organ and time stopping refrains. The revitalizing, just-under-eighty-minute show was a solid testament the consistency and excellence of Clinic’s near decade-long career.

Jen Paulson
Tags: We Were There