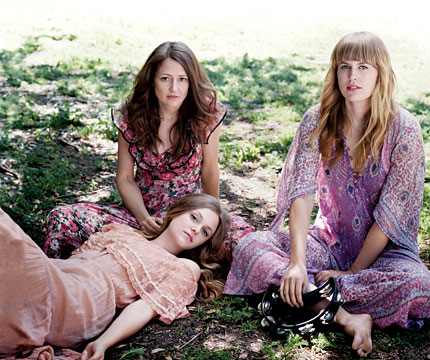 The Chapin Sisters recently released their debut album, but the three siblings — all nieces of late singer/songwriter Harry Chapin (of “Cat’s in the Cradle” fame) — have been singing separately and together since they were kids: Jessica, 40, cut class to record commercial jingles, while Abigail, 28, and Lily, 26, pulled children’s choir duty on records by the Olsen twins, among others.

“I ran into Mary-Kate at a New Year’s Eve party a few years ago,” Abigail says, grabbing a bite with her sisters before a show at the Echo in Los Angeles. “I told her I sang on Brother for Sale, 50¢, and she was like, ‘Uh…cool…thanks.’ “

Others in Los Angeles (where the trio moved from New York-Jessica in 2001, Abigail and Lily in 2004) have received them more warmly: During the Chapins’ first year in town, their sparse acoustic cover of Britney Spears’ “Toxic” became a surprise hit at influential Santa Monica radio station KCRW. “It’s unique,” says Nic Harcourt, host of the station’s Morning Becomes Eclectic, “and whenever you put something unique on the radio, people respond.”

The sisters also perform gorgeous close-harmony renditions of Madonna’s “Borderline” and Culture Club’s “Do You Really Want to Hurt Me.” But for Lake Bottom LP (Plain Recordings) — the title refers to a family farm in New Jersey — the Chapins wanted to showcase original material, which they started writing when they realized that “doing a show with five covers would pretty much get us nowhere,” admits Jessica.

On “Let Me Go” and “Wash Away,” the sisters bring spooky freak-folk atmosphere to old-timey string-band arrangements — think The Virgin Suicides set in rural Appalachia. And though the ladies enjoy performing in flowing vintage gowns and playing up the music’s cinematic qualities, they also say the songs act as an affordable form of therapy. Jessica, for one, wrote the lyrics to “Kill Me Now” about her recent divorce.

“There’s something paradoxically healing about taking the darkest shit inside of you,” she says, “and putting it into this really pretty package.”