AUDIO! Listen as Lars Ulrich reveals release date and much more about his band's new opus during a press conference for Bonnaroo 2008. 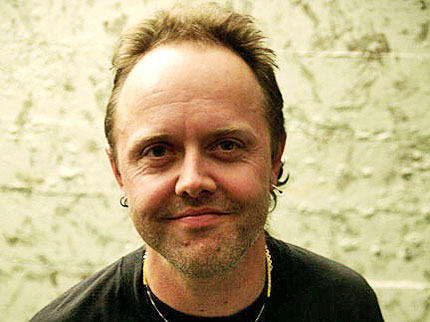 In a press call held this afternoon hyping the band’s much-anticipated headlining performance at Bonnaroo 2008, Metallica drummer Lars Ulrich detailed the hard rocker’s much-anticipated new record, which, he states, the outfit will cap next week with “a couple of nips and tucks” for release this September.

In a near five-minute ramble, Ulrich, who performed just last night at Los Angeles’ Wiltern Theatre to benefit Flea’s Silverlake Conservatory of Music, goes on to reveal the band’s progress on the album, and, most notably, the songs’ sound — “nutty,” “hardcore,” and “long” were just a few words he used to describe the 10-track set.

Here are some bullet points from Lars’ comments. Listen to Lars’ audio in the player below!

— The yet-to-be titled new record will drop sometime in September.
– The quartet will wrap production on the record next week, “by Wednesday or Thursday,” Ulrich confirms.
– The band hit the studio “with 26 songs,” then “went down to 14 with Rick [Rubin, producer]” and recorded 11. Only 10 songs will make the final tracklisting.
– The album’s tunes, “long… nutty ass songs,” will not be edited, and are “seven minutes, eight minutes, nine minutes” in length, recalling “some of the earlier records.”
– Sonically, the songs are “definitely all over the place… with a lot of variations.” Definitely “hardcore” and “nutty,” Lars says.
– This week the quartet have been working with its graphic designer on the album art.
– In the recording of the new set Metallica were seeking “a little bit of a more sane environment,” unlike the records they produced in the early ’90s. “And we’ve been able to keep that,” Ulrich says.