Video Vault: Panic at the Disco

Here's a highlight from Bumbershoot '07 -- an interview with the Las Vegas-based quartet's Ryan Ross and Spencer Smith, plus footage from their headlining set. 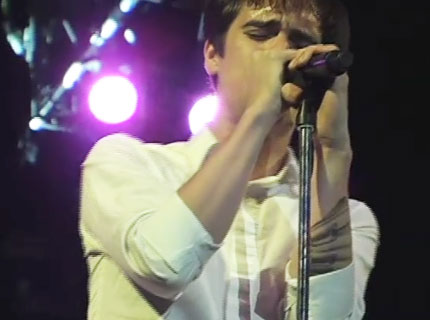 You may have noticed that SPIN.com is entirely brand new this month. One of the big differences: our on-demand video section. With this new regular feature, we’ll be dipping into our vast, growing video vault to show off some of our best clips.

With this morning’s announcement of the initial 2008 lineup, we look back at the splendid Memorial Day weekend spent at Seattle’s diverse Bumbershoot Music and Arts Festival in ’07, during which SPIN.com caught up with Panic at the Disco prior to the band’s headlining set at Memorial Stadium. Watch live footage plus video of guitarist/lyricist Ryan Ross and drummer Spencer Smith chewing the fat on recording their new album, the recently released Pretty. Odd., touring with their pals Fall Out Boy, and much more

Check back for more picks from the video vault!