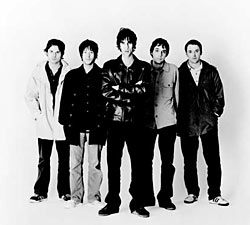 What? Enduring numerous break ups, legal battles, drug-fueled meltdowns, and one worldwide super-hit since the band’s birth in Wigan, England nearly twenty years ago, the spellbinding, pop-tinged psychedelia of the Verve will hit Coachella’s main stage tonight (April 25), bringing closure to the quartet’s 10-year absence. But before you hum the soaring melodies of instant classic “Bittersweet Symphony,” check out the Verve’s entire oeuvre; the murky swagger of A Storm in Heaven gem “Slide On,” plus the sharp strings and whirlwind guitars of “Lucky Man,” a typical Ashcroft ditty off 1997’s Urban Hymns, are both lesser-known highlights.

Who? Chisel-faced frontman Richard Ashcroft, guitarist Nick McCabe, bassist Simon Jones, and drummer Peter Salisbury comprise the original group, formed in 1989. Simon Tong, now guitarist for the Good the Bad & the Queen, briefly filled in for McCabe, who refused to return for a period after Ashcroft split up the band in the wake of sophomore set Northern Soul’s minimal success, only to reunite it weeks later.

Fun Fact: The orchestration on “Bittersweet Symphony” was legally sampled from a symphonic recording of the Rolling Stones’ “The Last Time,” but as Urban Hymns was dispatched to store shelves, the Verve claim the Stones’ management demanded 100 percent of the tune’s songwriting royalties due to the orchestration’s prominence in the song. To date, the Verve haven’t received a penny for the song.