In our May issue, out next week, the actress-turned-singer talks about other Hollywood gossip girls. 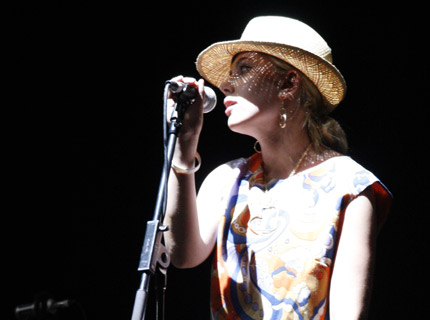 Since her star turn in Lost in Translation, Scarlett Johansson has always managed to keep a foothold on the classier, cool side of Hollywood. But now, with her Dave Sitek-produced debut album, Anywhere I Lay My Head, due out May 20 on Atco/Rhino, the comparisons to fellow musically-inclined young actresses were sure to follow. Here’s what she had to say about how she sees herself in relation to Lindsay Lohan and Paris Hilton:

“I have no relationship with either of them, even as far as my lifestyle or the music I listen to. They probably made music that fits with their lifestyle — ‘Wouldn’t it be great if I were dancing to my own song in “da club”?’ But my album is more suited to my lifestyle. I live a very low-key life.”

Check out our May issue for the full interview with Scarlett, including her thoughts on being glamorous, working with TV on the Radio’s Sitek, and her expectations for her recording career.