The globetrotting DJ legends reunite after a six-year absence and let loose on the City of Brotherly Love. 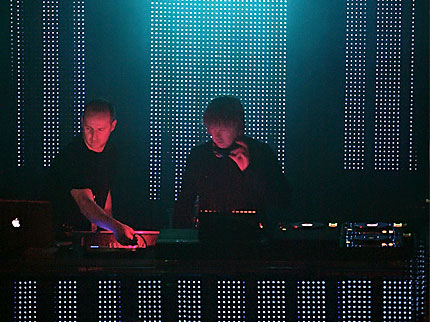 It’s dark, you’re sweaty, and there’s smoke coming from more than just the mist machine onstage. So was the case last night (April 3) at Sasha and Digweed’s first show together in Philadelphia in more than six years, as the Fillmore at the TLA pulsated, and the duo’s laptops, a stage set resembling an old school boom box, and fans’ rave glow sticks provided the club’s only luminosity.

Lost in their own orbits, the ridiculously wide-ranging mix of fans danced nonstop, beginning in small pockets at 10 P.M. and evolving into a solid wall of movement by 2 A.M., gyrating along to cuts from the duo’s expansive catalogue, as well as on-the-fly mixes. And to the dancing throngs, all that seemed to matter was the thumping bass pumping across the floor, up a thousand sets of legs and back into the air through hands outstretched in praise of the DJ duo’s ever-changing mix.

“I have no idea when one song ends and another begins, and I also can’t dance, but seriously… this is sick fun,” said Cosmo, a random Philly-native nodding to a friend who dragged him to his first progressive house/trance show. In response, his unidentified pal quipped, “It doesn’t matter what you know; it matters you let loose and feel.” Brilliantly, Sasha and Digweed engineered the entire atmosphere to ensure that.

We asked: Sasha and Digweed have spun all round the world, and have also produced Global Underground Series records GU 013: Ibiza and GU 014: Hong Kong. If you could pick any location across the globe, where would you most want to take in their next show?

Jaimie Krems
Tags: We Were There