Cool-kid New York rapper gets his Marty McFly on. 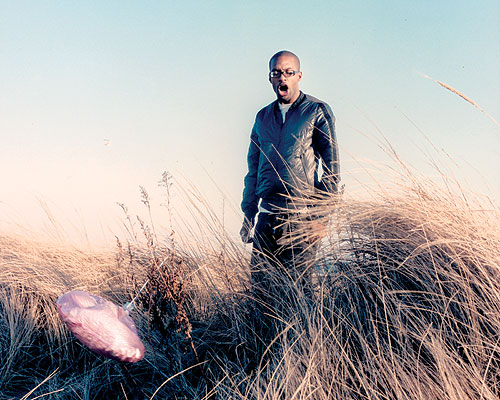 Hip-hop is not without its unique ironies: Who could have guessed that one of today’s most self-consciously futuristic artists would hail from the storied borough of the Bronx, where the music was born, way back in our 1970s Kodachrome past? The coincidence is not lost on Mickey Factz.

“I’d like to think I’m everything that Afrika Bambaataa would’ve envisioned hip-hop to be in 2008, 2016, or 2030,” says the lanky 22-year-old former paralegal. A lofty ideal, but Factz’s thoughtful, easygoing manner is far from arrogant; what’s more, he’s got the neighborhood bona fides to back up his claim to be the famed hip-hop forefather’s progeny. He attended Bambaataa alma mater Adlai E. Stevenson High School in the East Bronx, which also counts MCs Remy Martin and Drag-On as alumni. The experience was formative for the tricky lyricist and fashion plate, who fiends for kaleidoscopic skater streetwear.

“It was the competition,” says Factz, slouched on a leather couch in a Lower Manhattan restaurant. “A lot of other schools came to ours to battle. Big Pun came by to check us out. If you were somebody in the Bronx, you had to have stomped through Stevenson at least once or twice.” Like Bambaataa, Factz — who grew up on gospel and then graduated to hip-hop as a teen — dismisses the usual musical boundaries. “I want a cross-pollination of all genres, from electro to techno to pop to rock, because the urban communities aren’t listening to just Jay-Z anymore,” he explains. “They’re listening to Linkin Park, Spank Rock, the Cool Kids, Kid Sister, and Panic at the Disco.”

Factz’s 2007 mix tape Heaven’s Fallout demonstrated that eclectic curatorial taste. Few rappers would rhyme over tracks from the Prodigy, Röyksopp, and Mark Mothersbaugh’s score for The Life Aquatic With Steve Zissou; fewer still possess such a presence and versatility so early in their career. On the Internet-only song “I’m Sean (50 Shots More),” Factz raps from the perspective of Sean Bell, an unarmed man killed by New York police in 2006. But he also jokes about being “too Zoolander for ‘em.”

“I’m just trying to have a good time while bringing a little bit of positivity back,” he says, grinning. And what could be more old-school B-boy than that?

Pete Lofficial
Tags: This Is Happening