The Washington, DC-based rapper's debut will be the first release from Ronson's newly-minted Interscope partnership. 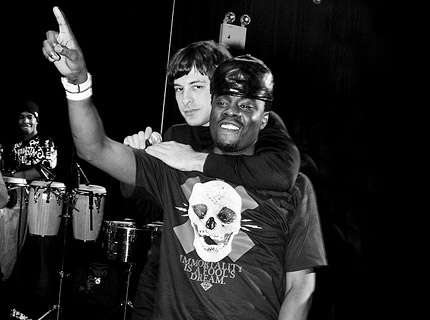 Mark Ronson, the three-time Grammy Award-winning production mastermind behind much of Amy Winehouse’s acclaimed album Back to Black, among many others, has announced the union of his Allido label with Interscope Records, an initiative focused on building a lengthy roster of up and coming artists, the first of which will be D.C.-based rapper Wale.

“I’ve always tried to balance discovering brilliant new talent and producing great records,” Ronson said in a statement. “Interscope is the perfect place for us to do that.” Currently holed up in the studio, Ronson and Wale (pronounced wah-lay) are hard at work on the rapper’s debut, expected out later this year. But to hold you over, here’s a teaser — the grooving, Seinfeld-sampling and instrumental-heavy throwback “The Perfect Plan,” highlighted by Wale’s lofty, rolling rhymes.

Meet Wale: the next Ronson-produced chart-topper?

Now Hear This: “The Perfect Plan”