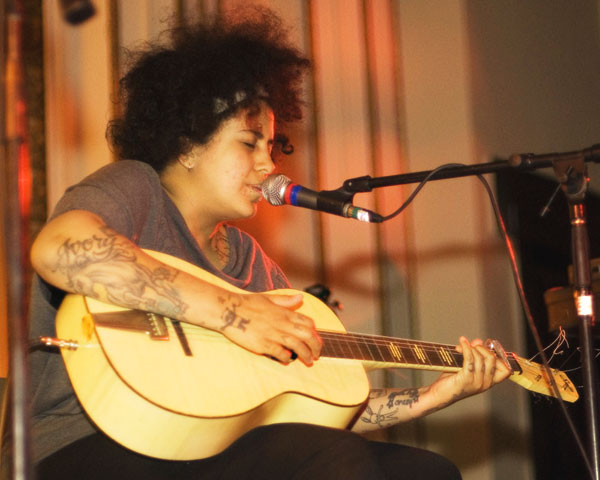 “I was told you little ones have to be home at a certain time, so I’ll play as fast as I can,” said Kimya Dawson, two soft-spoken ditties into a 25-track setlist last night (April 14) at Chicago’s new best-kept Mansion venue — ssshh! — in the city’s tree-lined Emerald Necklace neighborhood.

Switching gears as an intimate gathering sat criss-cross-apple-sauce, Dawson plucked heavy-hearted cuts on adult inhibitions (“Velvet Rabbit”), politics (“Fire”), and deflated hearts (“Viva La Persistence”), before explaining that her mother was headed to surgery to have tumors removed the next day, thus punctuating the chorus of “My Mom”: “As long as she is haunted she’ll never get strong / My mom needs you gone,” Dawson lamented.

But after the get-well hump, Kimya returned to her punkette kid role, flaunting tracks from her upcoming children’s album, Alphabutt e. pee. “Bobby-O,” the “skinny, younger brother of Fabio,” practiced “jumping jacks in his pink speedo” when not riding “a horse in Mexico,” rhymed the frazzle-haired poet to an explosion to giggles.

With a nod from the Mansion staff, Dawson knew the venue’s all-age curfew loomed, but in punk fashion, laughed it off with a good five more tunes, including one of the night’s three Juno tracks, “My Rollercoaster.” Next, after a medley mashingEdwin McCain’s cheeseball hit “I’ll Be Your Crying Shoulder” with Willie Nelson’s “On the Road Again,” Dawson exited with final a prayer for her mother, matching her eclectic persona to her equally diverse catalogue, and proving to the kids even soft-spoken, child-friendly, and aging punks still break curfew.

We Asked: As you probably know, Kimya Dawson, a longtime folk-punk icon, contributed many tunes to blockbuster film Juno. Considering the movie’s commercial success, do you think Dawson has sold out? Or have you witnessed backlash to her music in the film’s wake?

SPIN Staff
Tags: We Were There