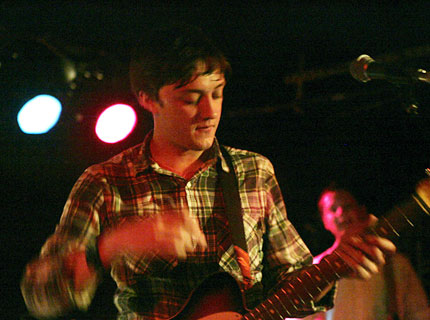 Poor Boris Yeltsin’s message could have been as plain and simple as the band who still love him: “We want to make you very happy,” songwriter and drummer Philip Dickey said last night (April 22) as the Springfield, MO five-piece celebrated its second date of New York City dictatorship to a sold-out crowd at Mercury Lounge.

Clattering, sharp and clean on stage, the Yeltsin five breezed through a set list inclusive of both their records, playing delectable Broom favorites “Pangea” and “Oregon Girl,” which hearkened a feeling similar to college radio and campus shows, falling in the teenage-epic vein of Weezer and even Phantom Planet.

And the tunes off the band’s recent release, Pershing, were ever more vibrant with live air, as more demanding, loosely-constructed songs such as “You Could Write A Book” and “Dead Right” were made enjoyable by SSLYBY’s clean-cut instrumentation and dance antics (featuring cowbell courtesy of bassist David Lizmi of opener Via Audio). SSLYBY surprised the audience at last with an unidentified B-side, an ever-anthemic track reeling in and out of riff grooves, stirring the gratification Dickey initially promised.

We asked: Which band (old or current) do you think would have been banned the quickest by the pre-Yeltsin Communist regime?

Taleen Kalenderian
Tags: We Were There