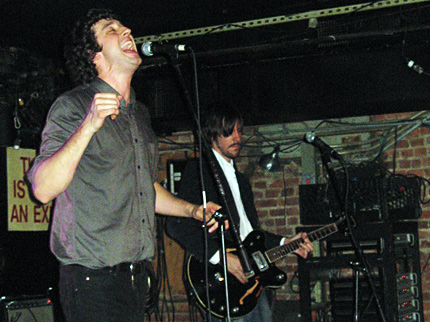 As fans found solace from the torrential downpour outside New York City’s Mercury Lounge last night (April 1), wringing out clothing, tousling soaked hair, and wiping off faces, a dry towel felt more in order than another plunge in the urban dunk tank. But French Kicks, saddling up for the first night of a three-week residency at the downtown venue, had other plans, dousing the crowd with an hour-plus set that unveiled pieces of their new record, Swimming, which hit digital markets yesterday.

The glossy, ethereal and sugar-coated pop of new tracks like set opener “Abandon” proved the band’s lavish sound translated live, even stripped to a quartet, though the album’s wall-o-vocals sound experienced a few shortcomings. But the smooth, lost-in-a-K-hole groove of “Said So What,” which saw guitarist Josh Wise take the mic, further validated the new material, as did “Sex Tourists,” its sputtering guitars fizzing into the swaying hips and outstretched arms of slowly flailing fans up front.

Sure, the new tunes converted flawlessly and were well received, but for this French Kicks first-timer, the outfit proved their keep by adding extra oomph to older tracks. Vocalist/multi-instrumentalist Nick Stumpf — whose lithe, lanky stature rose high atop the crowd — led his band through livelier-than-album-renditions of “England Will Just Not Let You Recover,” off 2006’s Two Thousand, and set closer “One More Time” from 2004’s Trial of the Century.

In the set’s aftermath, basking in the dank, soggy venue, two things came to mind: a) “Yes, that wet dog smell is in fact coming from me,” and b) “I may want to keep it around for a while as a keepsake.”

We asked: Swimming, the latest album from the French Kicks, drops to digital outlets today. With the record’s title in mind, and considering summer is just around the corner, if you were to pick any tune by any band to listen to while swimming, which would you choose?