The Decemberists' poetic captain hits the high seas with a live solo record. 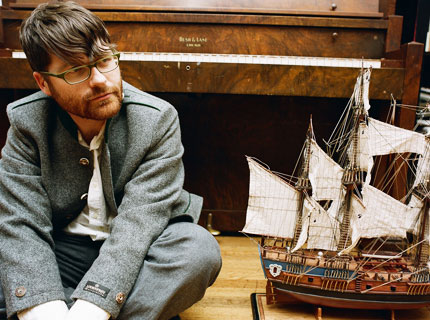 What? Heading the Decemberists, Colin Meloy’s unadorned vocals and story-tale ramblings peak with orchestrated whimsy. But strip away the instrumentation, and you have Colin Meloy Sings Live!, an equally wistful collection of tunes recorded during Meloy’s 2006 solo tour, out today (April 8) via Kill Rock Stars. With songs spanning his career (sans The Crane Wife), plus covers (Smiths, R.E.M., Pink Floyd) and previously unreleased tunes — including the “worst song I’ve ever written,” the hilarious “Dracula’s Daughter” — Live! is the gregarious troubadour at his best — engaging fans in comical banter, and reciting his tales in buccaneer’s-got-the-blues melodies. Oddly epitomizing the entire record: at one point, Meloy jokingly introduces a stuffed animal sheep, a skull, and a toy ship, all which accompany him onstage.

Who? Portland-based singer/songwriter on a poetic-lore kick, Colin Meloy, better know as the frontman of indie rock darlings the Decemberists. Catch Meloy throughout April and May as he tours solo across North America.

Fun Fact: Meloy has previously released tour-only EPs, which cover solely Morrissey and Shirley Collins tunes. With Live!, fans are treated to a few of the highlights.

Now Hear This: “We Both Go Down Together”