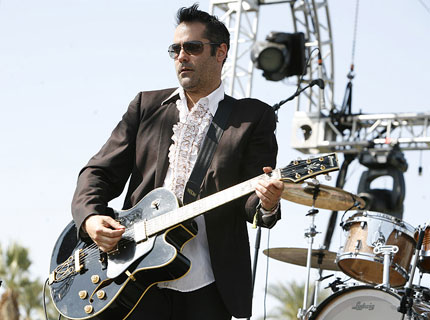 Perhaps the biggest mystery of the day (other than “Where am I gonna stash those pesky limbs of mine while I try to find a place to stand for the Prince set?”) was the guest list for Mark Ronson’s gig. Given the fact that two of his most prominent leading lady vocalists have a jam-packed transatlantic tabloid schedule to tend to, the question on everyone’s mind was just who would show up to sing the U.K. super-producer’s music. Thankfully, Ronson came with backup — and we’re not just talking about his coquettish string quartet that filled their downtime with synchronized shoulder shakes and ’60s girl group head sways.

Chicago rapper Rhymefest popped up on Ronson’s version of Britney’s “Toxic,” while nice-soul-for-a-white-guy phenom Sam Sparro performed his slick electro-funk tune “Black and Gold.” But our confidence was fully engaged when Ronson brought out the Rumble Strips’ Charlie Waller, with whom the tailored-suit-favoring producer changed his own game

Instead of covering someone else’s music, as he did on last year’s Version, Ronson invited Waller to lead the ensemble in the Rumble Strips’ own version of Amy Winehouse’s “Back to Black” — “His cover is better than ours,” Ronson shrugged.

We were skeptical, but damn that horns-loving genius if he’s not right: Waller’s Tom Jones-y rendition just about knocked us over. It wasn’t all so spine-tingling: Neptunes-endorsed electro-dance artist Kenna went the extra mile by scaling the side of the stage on “Just,” but not even death-defying attempts at grandeur could rescue the tune from its Thom Yorke inferiority complex.

We could go on, but instead, here’s where we get all “no big deal, so-and-so was there too”: the Kaiser Chiefs’ Ricky Wilson classed up the joint with another set highlight, singing lead on Ronson’s reworking of the Chiefs’ “Oh My God.” Later, the Charlatans’ Tim Burgess dropped in for a sedated performance of his own tune, “The Only One I Know,” and Klaxon Jamie Reynolds manned the vocals for “Stop Me.” We know what you’re thinking: Sure those are big names, but what’s a British star-fest without an Osbourne in the mix? Not to worry: Kelly came out to help close out the tune.

Most Likely to Disagree With Us About Ordering Red or White With Lunch: DeVotchKa

Considering DeVotchKa’s amalgamated influences, one can never be sure if the live effect of the Denver quartet will result in a desire to start a plate-shattering celebration, meet for a showdown at Sad Hill Cemetery, or pioneer a road trip pilgrimage to Redondo Beach with Steve Carell. Sadly, the band’s mid-afternoon performance at the sweltering Outdoor Stage elicited none of these urges. Okay, the Carell carpool is sorta tempting — we are flying back home out of LAX after all. Cue up “How It Ends,” throw in an outlet stop on the way to the Little Miss Sunshine pageant, and you can count us in.

The gypsy-leaning band took to the stage dressed in their least breathable of formal wear — with vocalist Nick Urata decked in a black suit with ruffled tux shirt and swilling from a bottle of what appeared to be red wine. (Really? Red wine? That’s your beverage of choice? We’re dreaming of taking a bath in Gatorade ice cubes and you’ve got a hankering for a full-bodied Cab?)

DeVotchKa geared their set-list to their more Argentinean tango tunes (with the straighter-ahead indie rock of “Transliterator,” off their acclaimed new set A Mad and Faithful Telling, a notable exception), and even brought tankini-clad aerial performers to up the entertainment ante. But despite the acrobatic oohs and ahhs, the tuba and upright bass sonic flourishes, and Urata’s deft Theremin-produced UFO sound effects, the overall experience still came closer to “best Balkan wedding band of all time” than “best full stop.”

Most Likely to Be Upstaged By His Own Banter: Stephen Malkmus

Before the face of ’90s lo-fi even appeared, witty commentary was already in circulation at the Outdoor Theater. “Is that his brother?” one fan wondered aloud to his fellow concertgoer, referring to a roadie adjusting a mic. “I think he’s just super-nerdy,” she clarified. Playing to a crowd who must have simultaneously struggled with the glee of a Jicks inclusion on the bill and the dashed hopes of a Pavement reunion that came with it, Stephen Malkmus turned up to play some jammy tunes (among them “Dragonfly Pie,” “Elmo Delmo,” and “Hopscotch Willie”) off his latest album, Real Emotional Trash.

Concocting a set to please those who prefer the noodling, hippie side of Malkmus to his quirky, poppier alter-ego, the Jicks frontman definitely remembered to pack conversational currency. “Indio in May equals Stockton in July,” he announced. “We’re doing California heat math!”

Most Likely to Start a French Equivalent of the Macarena Dance Craze: Yelle

Decked in a sequined mini-dress emblazoned with an Alice Cooper-approved skeleton, French dance vixen Yelle introduced herself to the crowd at the Mojave tent with a native greeting: “Are you ready to shake your ass, Coachella?” Like a French electro version of the young Olivia Newton John who stole Kylie Minogue’s dance moves, Yelle loco-motioned the room into a frenzy with such cooing sonic bon mots as “Tristesse / Joie.”

“Do you want to dance with me? Copy me!” she insisted, before launching into the big move: The “Y” from “YMCA” followed by a sexy little shimmy. Like the African Ant-eater scene in Can’t Buy Me Love, the audience took up the move with widespread fervor. A shiny dress, a catchy tune and an accent — gets ‘em every time.