And just how was the true public debut of She & Him? Quite promising! 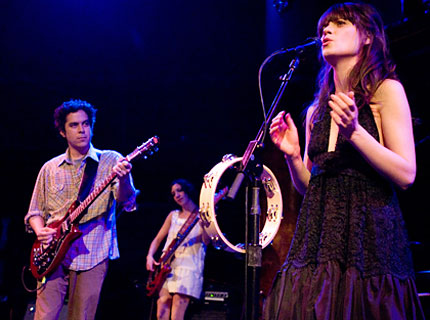 For the closing night of Noise Pop, the hottest ticket by a landslide belonged to She & Him at Great American Music Hall, the first bona fide public live show for the Zooey Deschanel/M.Ward collaboration. That’s right. The first. Okay, so they did perform at any number of Sundance-related events. Just don’t go telling Noise Pop HQ you saw them; Redford’s always trying to salt their game.

Following opening numbers by an extremely soulful Adam Stephens (of Two Gallants) and an updated honky tonk set from Whispertown 2000, the headliners took to the stage with band in tow.

Looking even wider-eyed-than-usual and sporting a ’60s-style, black halter party dress, Deschanel appeared visibly apprehensive about the hype she was up against. It was all so very pivotal-scene-in-the-music-biopic, where our heroine first takes to the stage to say, “Hey world, I can sing!”

And the actress can — so clear-as-a-bell-beautifully, in fact, that we forgot how postmodern the whole thing was. Anyone who’s heard “Why Do You Let Me Stay Here” online knew there was promise, but Deschanel swept away any doubts with her vocal stylings on She & Him original “Sentimental Heart” and via an innate chemistry with Ward during a duet on Smokey Robinson’s classic, “You Really Got a Hold On Me.” In the instance of any Walk the Line sequel, Reese Witherspoon would be on notice.

Melissa Goldstein
Tags: Noise Pop '08, We Were There