Tilly and the Wall Unveil ‘O’

The eclectic Omaha-based fivesome return with third LP, out June 17 via Team Love. 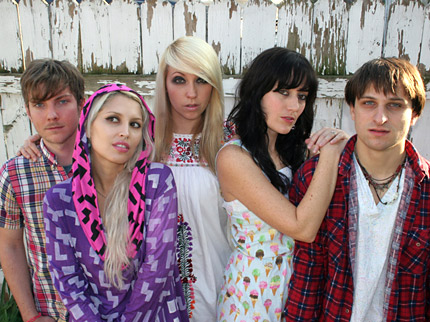 On the heels of a dancetastic SXSW (watch our video!), the imaginative boys and girls of Tilly and the Wall have regrouped — guitarist/vocalist Derek Pressnall pulled double duty in Austin with his project Flowers Forever — and announced the June 17 release of their third LP, unofficially titled O. The follow up to 2006’s sophomore set Bottoms of Barrels, which a press release states “has no title,” but “could be called O because its cover it just that: an oval-shaped frame for the artwork,” was produced by Saddle Creek fixture Mike Mogis (Bright Eyes, Rilo Kiley, Cursive).

What artwork will appear in this mysterious O-shaped frame, you ask? Well, it’s up to you: Tilly and the Wall are inviting fans to submit their own artwork. They’ll pick a dozen entries, and include a different one with each month’s pressings of the album. Collect all twelve!

Oddly, the band’s surprise hit single, “Beat Control,” isn’t included on the new full-length; it is available for download on iTunes and Amazon, though, right now, with O’s “Cacophony” as a b-side.