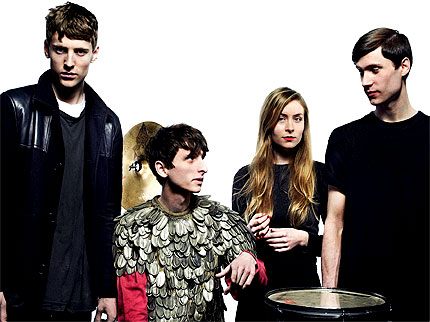 “I used to get night terrors,” says These New Puritans’ singer/guitarist Jack Barnett, backstage before a show in South London. “I once saw a ghost — a glowing blue cat in my room — and these purple and yellow orb things. It was really scary.”

Welcome to the weird post-post-punk world of England’s latest art-rock buzz band, a place where glowing globes mingle with references to 16th-century occultists and numerology. Synthesizer player Sophie Sleigh-Johnson, 19, chooses to write notes on a small pad rather than answer questions verbally, while bassist Thomas Hein, 21, simply walks away when approached. The two who do talk, frontman Jack, 20, and his twin brother, George (drums), reveal some curious inspirations. “Making music is like casting spells,” George offers. “Musician and magician are similar words. It’s better to take a small idea, like numerology, and make it mean something, rather than to take something like death or love and make it meaningless.”

From the age of seven, the twins have been conjuring up imaginary bands and recording on a four-track in their parents’ shed in the small seaside town of Southend — a “cultural wasteland,” according to Jack. Since they formed a proper band, their rise has been swift. They signed a record deal after their very first gig, in July 2005. Two years later, they were handpicked by designer/photographer Hedi Slimane to record a 15-minute track (“Navigate, Navigate”) for last year’s Dior Homme fashion show. “People got the wrong impression from that,” says George testily. “We don’t give a crap what we look like. We’re not one of those bands that has blow-dryers backstage.”

Even without the aid of high-profile benefactors, These New Puritans make a strong impression. Their full-length debut, Beat Pyramid (Domino), invokes post-punk standard-bearers like the Fall and Wire, as well as the grimmer side of electronica. The album is all gnashing guitars, synapse-frying synth drones, and galloping drums, with the occasional bluesky chorus to alleviate the gunmetal gray mood. “If you listen several times, you’ll notice little treats,” says Jack, pointing out that musket blasts and knife clanks were sampled to create percussion tracks. Despite the out-there recording techniques and odd song titles (“MKK3,” “Infinity ytinifnI”), the Barnett twins insist that they are interested in traditional rock hooks, not avant-garde experiments. “I admire simple music,” says George. “Anyone can make a load of noise, but not everyone can make a concise song.”

Tim Chester
Tags: This Is Happening