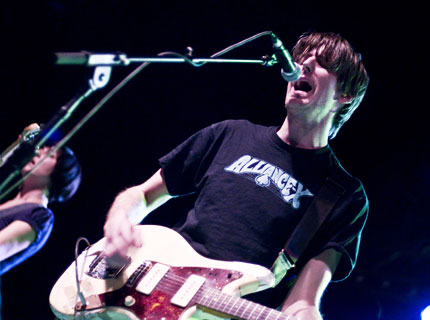 Stephen Malkmus and the Jicks kicked off their tour behind new LP Real Emotional Trash last night (March 19) at Minneapolis’ First Avenue, but not before catching the Timberwolves game at nearby Target Center. The T-Wolves “utterly dominated,” said Malkmus, a renowned sports fanatic, before driving the audience through his post-Pavement catalogue, playing not only noodling new tunes, but also gems from his 2001 self-titled debut and beyond.

Relatively new stickswoman (and ex-Sleater-Kinney member) Janet Weiss’ skin pummeling on “Baby, C’mon” proved the Jicks’ dexterity, exemplified by over-exuberant fans incessantly screaming, “best band on the planet!” Malkmus rattled and rhymed, and, especially on new tracks like “Out of Reaches” and “Elmo Delmo,” strutted his guitar chops, winning the hearts of fans previously hesitant to the new material. Though the indie legend may now qualify as an “aging rocker,” this show left no doubt that Malkmus still has a few tricks up his sleeve.

We asked: What is the filthiest piece of Real Emotional Trash in your life right now?


Janet Weiss on the drums / Photo by Jonathan Behm

Jon Behm
Tags: We Were There