Reviews: The Explorers Club, The Whip 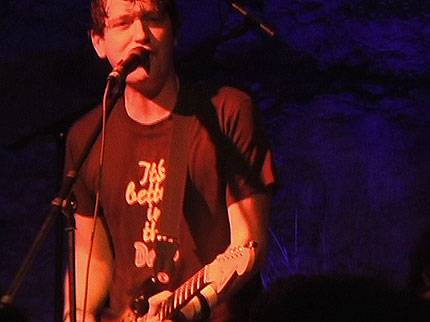 On Friday night, I opted for two of my pre-SXSW/I-only-know-you-from-an-MP3 faves, the Explorers Club and the Whip. Getting in to see the former proved to be no easy task. The Mohawk, a venue on Red River, has two stages, and while Explorers Club were setting up on the smaller indoor stage, Bon Iver and Jens Lekman were scheduled on the large outdoor stage, and the blogger-loving queue stretched far out into the street.

After promising I was a) only going to be there for 30 minutes, b) really going to see the band inside, and c) willing to give away my first-born son to the doorman, I slipped in for the Explorers Club and was promptly stunned to find their live/semi-drunken vocal harmonies to be just as lovely as the recorded ones on their latest, Freedom Wind. What I wasn’t prepared for: a rowdy encore of Chuck Berry’s “Johnny B. Goode” that began when guitarist James Faust stripped off his jacket to reveal a gun-show-friendly tank top and launched into the classic track’s signature riff, and ended in a pile of humanity onstage that, on some layer, included the band’s merch mannequin, upon whom unsavory acts aplenty seemed to be committed. Watch the video here, and accept my apologies (and the Mohawk’s) that the lighting was so inappropriate for shooting):

The Explorers Club, “Johnny B. Goode”

I shuffled out into the street, much to the delight of the still-massive line awaiting Bon Iver, and began to hear familiar synths and guitar hooks. My shuffle quickly turned to full-on trot when I realized it was the Whip, about whom I’d written last week, playing next door at Club de Ville. They were in the midst of “Trash,” as excellent a Gang-of-Four-guitar-aping, Junkie-XL-synth-loop-pilfering, British-multi-gendered dance rock tune as I’ve heard since sometime late last month. But it’s still a banger, so I slithered into the pit, just behind a gentleman with a light-up white sportcoat.

What I wanted most to hear from the Whip was a second tune beyond “Trash,” a little something new on which to hang my proverbial sequined chaps, but, quite expectedly, “Trash” was the set-closer. Alas! But it still rocked my world, as the video below will hopefully do for you: