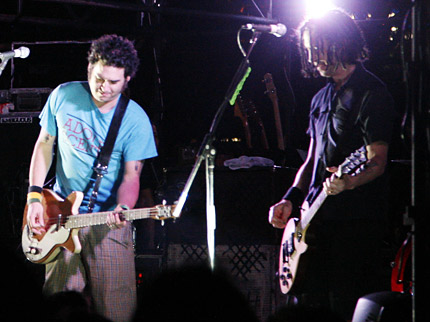 I consider myself an unrivaled Breeders fan, but as NOFX and Kim Deal and co. took the stage simultaneously just a hundred or so yards from each other, raggedy punk statesman Fat Mike may have had a point: “Do we have more people than the Breeders?” the frontman questioned, “They’re so good, but we’re fucking better.” The band then plowed through the bulk of 1994’s classic Punk in Drublic, as bodies circled in a mosh-pit puree, some fans jumping onstage, throwing beers, and one who even climbed the scaffolding and leapt from some 20 feet into the crowd.

On the other end of the field, the crowd was decidedly more tame — and old. As youths and punk lifers raged elsewhere, bespectacled thirty somethings watched on as the Breeders rolled through old hits and tracks from new LP, Mountain Battles. The plodding “Night Of Joy” dispatched Kim Deal’s soft, bored-chick whispers, while “German Studies,” a tune sung in entirely in German, beefed up the sound, shouting a wall of thick backing vocals and scorching, crazed riffs. The glimmering guitar notes and crashing drums of “One Divine Hammer” and the mad, fuzzed familiarity of “Cannonball,” both off 1993’s Last Splash, evened the score between the aging acts (whose members are both in their forties), but NOFX’s rapid onstage circus and rowdy crowd proved punk’s youthful staying power.