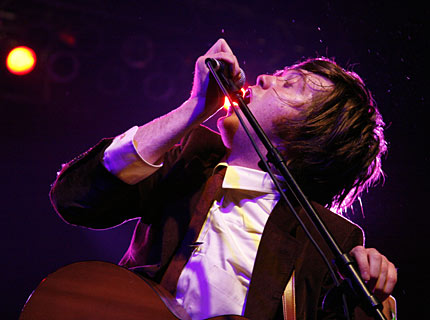 Cabbing to the far end of 4th Street, we hit the Austin Music Hall for a set from hometown folkies Okkervil River, which was preceded by the Austin Music Awards — naturally Spoon and its frontman Brit Daniel walked with a staggering nine awards in total.

Later, Okkervil took the stage and churned out three tunes from their latest record, 2007’s Stage Names, including a vocally emphatic rendition of “Our Life Is Not A Movie or Maybe” and “Unless It’s Kicks,” before supporting Austin’s own rock legend Roky Erickson. Together, they ripped through Erickson’s 13th Floor Elevators gem — and High Fidelity soundtrack fave –“You’re Gonna Miss Me,” a total set-topper.