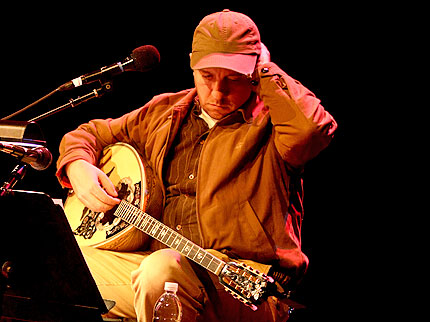 The real-life Christopher Guest Musical, otherwise known as the Magnetic Fields, mounted their Brechtian salon at SF’s Herbst Theater on February 29, for the second of a two-night sold out engagement. Why the hot ticket? For fans of hyper-literate (to-the-point-of-needing-Ritalin) pop, Mag Fields equals best date night ever.

The group’s mastermind, Stephin Merritt, sat off to the side of the stage, cradling his bouzouki and offering the odd catty remark, while special guest vocalist Shirley Simms joined pianist/spokesperson Claudia Gonson and the usual suspects.

Bookworms certainly recognized the accordion player as author Daniel Handler, a.k.a. Lemony Snicket, who joined the band for a series of songs from the Lemony Snicket soundtrack (recorded by Magnetic Fields side project, the Gothic Archies), including an audience-participation ditty called “Scream and Run Away.” Okay, so maybe we played along and slumped down in our seats for the chorus with the rest of the audience, but it was just to appease diva Merritt, who returned the favor by playing the 69 Love Songs special, “Papa Was a Rodeo.”

“On behalf of Stephin Merritt, you are welcome,” Gonson confirmed after the number concluded. One audience member insisted she’d been presumptuous in said appreciation: “I hate you Stephin Merritt!” he screamed, leaving an unspoken “for making me love you” hanging in the air. “That’s what you get when you respond to the audience,” Merritt retorted, sniffing to his musical compatriots. “If you ignore it, it will go away.”

But as much as Merritt might wish that to be true, we highly doubt it — especially judging from the joyous reception to set highlights “I Don’t Believe You,” “I Wish I Had an Evil Twin,” “The Book of Love,” and new insta-classic, the frat-boy-with-a-heart–themed, “Too Drunk to Dream.”

More photos after the jump…

Melissa Goldstein
Tags: We Were There