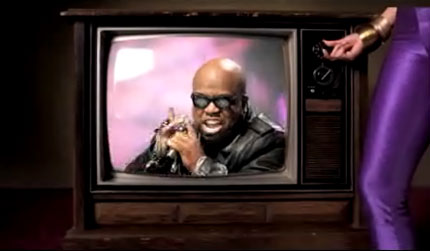 The music video for “Run,” the first single from Gnarls Barkley’s forthcoming sophomore effort, The Odd Couple, has failed the Harding Test, which establishes if a TV image will trigger epileptic seizures. Subsequently, the video is now banned from MTV, but thanks to the Internet, you can watch it below — just be careful! [Via Billboard.com]

Though Pavement principal Stephen Malkmus told us this month that a Pavement reunion would only happen “when we’re really paunchy and our fans are cashing in their IRAs,” it appears guitarist Scott Kannberg, aka Spiral Stairs, either has other plans for the indie mavens or is now fat and living off his 401k. “Matador is having a 20th anniversary party soon,” Kannberg told EW.com, “so maybe we’ll try to do something for that. The only hurdle might be getting everyone to drop what they’re doing, but I’m sure the excitement of playing again will make it okay.”

Radiohead didn’t share sale figures, but Nine Inch Nails have gone public with some numbers for the online-only release of their instrumental set, Ghosts I-IV, which kicked off two days ago. According to the band’s website, The band moved all 2,500 of their $300-a-pop limited edition box sets. Do the math: $300 x 2,500 — a cool $750,000! It’s still available at other price points, including the free, nine-track sampler.