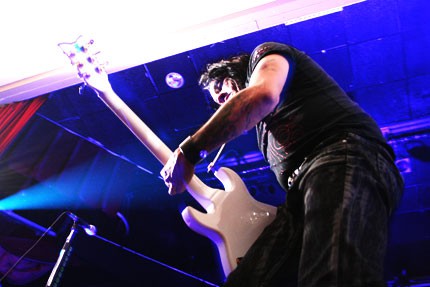 There’s probably not a Seven Stages of Grief program specific to woeful industrial fans, but if there were, it would resemble Ministry’s show at Vancouver, BC’s Croatian Cultural Centre last night (March 27). As fans awaited Ministry’s set and coped with the band’s imminent demise at the third stop on their CU LaTour, billed as “the last chance to see Ministry live,” openers Meshuggah belted a mind-fuck of time signatures and chugging riffs, paying homage to their metal forefathers about to descend upon the stage.

Legendary frontman Al Jourgensen commanded his tricked-out microphone complete with antlers, horns, and skulls and leveled hits spanning Ministry’s catalogue, from oldies “What About Us?” and “Stigmata,” to 2006’s “Khyber Pass.” Devil horns held high, younger fans flung pit-ward with gusto, emerging with spurting gashes as Jourgensen goaded the reluctant to mobilize: “Look at this intellectual,” he growled at a motionless kid up front. “Get rowdy you stupid fuck!”

Later, with Fear Factory singer Burton C. Bell joining onstage, Ministry slammed into the encore, and when the lights dimmed and sweaty, bloody, and thoroughly rocked fans trickled out into the streets, one Mohawked rocker was overheard lamenting, “That can’t be it, man. It can’t be.” Ah, denial — let the grieving begin.

We asked: Since this is Ministry’s farewell tour, what parting words would you like to say to the band?

Kaitlin Fontana
Tags: We Were There