In a campy response to hype generated over statements he made in our April issue, Michael Stipe addresses the "hot news" about his sexuality. 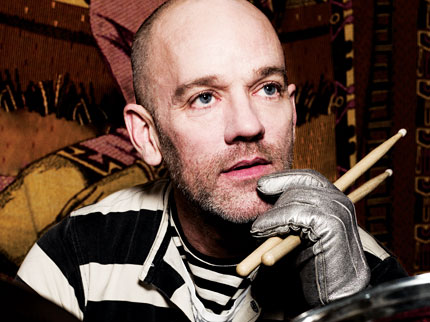 We only write the stories here at SPIN. But every month, as with loads of other magazines worldwide, the rest of the media chooses bits and pieces of our issue to repackage as news. And every now and then, one story gets picked up again and again, even when the angle isn’t quite right, as was the case regarding comments made by Michael Stipe in our April issue, out next week.

The R.E.M. frontman spoke candidly about being an openly gay celebrity (read the excerpt here). He did not announce that he was out. As several thorough outlets mentioned, a 2001 interview with Time — not our April cover story — is widely agreed upon as the moment where Stipe first publicly admitted his sexual preference.

But, the wires and blogs were peppered with headlines like “R.E.M.’s Michael Stipe: I’m Gay” (US Magazine) and “Michael Stipe No Longer Trapped In the Closet” (Stereogum).

Obviously entertained by the odd outpouring of press about his supposed coming out party, Stipe delivered a rather hilarious video clip/faux press conference to People.com in which he outs his bandmates — Peter Buck and Mike Mills — as heterosexuals.