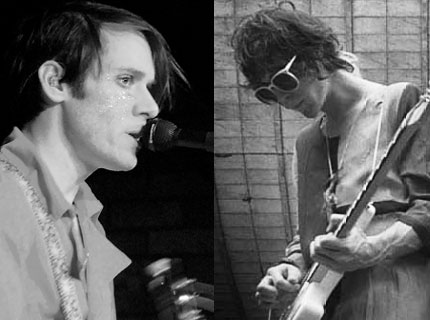 The psychedelic minds of MGMT’s Andrew Van Wyngarden and Of Montreal’s Kevin Barnes have united to form side project Blikk Fang, and hope to release a debut LP in early 2009. Until then sate your curiosity with two tracks — “(Just a Little) Judas Tonic” and “Nupital Eagles Sharpened” — posted at purevolume.com. [Pitchfork]
Boston’s Dresden Dolls — evidentially disciples of the Eastern philosophy of yin and yang — have announced the May 20 release of No, Virginia, a collection of new songs, as well as old demos and B-sides from 2006’s Yes, Virginia sessions.
Coachella promoter Goldenvoice has teamed with Amtrak to provide a free train shuttle, dubbed the Coachella Express, between Los Angeles’ Union Station and the festival grounds at the Empire Polo Field in Indio, CA. The train holds roughly 500 people and will operate on a first-come, first-serve basis, with one train run departing April 24 and one returning April 28. There’s an online registration form at Coachella.com. [NME.com]
Former New Order bassist Peter Hook is gearing up to drop the collaboration-heavy debut from his project Freebass in late 2008/early 2009, and will launch the Hacienda Tour, a DJ jaunt celebrating the legendary Manchester Club alongside the likes of Happy Mondays’ Shaun Ryder, at Miami’s Winter Music Conference on March 28.