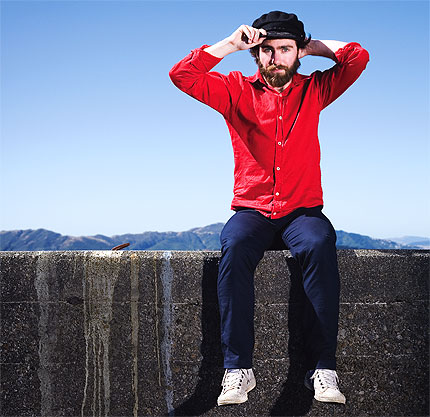 But that pride does have its limits. “I did an interview with this reporter in San Francisco, and his first question was, ‘So, what was it like growing up in a house with a genius? Was it a crowded house?'” he recalls, sighing. “And for the next 20 minutes, ‘Don’t Dream It’s Over’ was all he wanted to talk about. I felt like going, ‘This interview is over.’ “

Just old enough to shave when he played drums and guitar on his father’s first solo outing, 1998’s Try Whistling This, the multi-instrumentalist chose to write, perform, and record his remarkable solo debut album of bittersweet indie pop, I’ll Be Lightning (Yep Roc), almost entirely by himself. And that’s the way he likes it. Eschewing the usual army of Pro Tools experts and sound engineers, Finn set ut to create a record of his own raw first takes. “My favorite bit of each song is the bit that makes most bands or engineers go, ‘Ooh, we should fix that’ or ‘That’s a fuck-up,’ ” he says.

Mixing his childhood fascination with the Beatles and Neil Young with his adolescent love of alt rockers like Nirvana and Pavement, he created a uniquely postmodern record full of striking contrasts: pastoral acoustic guitars and rugged electronic beats, soft melodies and spastic rhythms, big choruses and pipsqueaky noise. Full of time-shifted instrumental loops and wiggy samples, songs like “Second Chance” would appear tough to pull off live. But as anyone who’s witnessed a Finn gig knows, he does so with ease — and more impressively, alone — looping his guitar riffs, detuning others into bass tracks, and then leaping onto the drum kit for pummeling finales, looking every bit the antithesis of his well-groomed, well-mannered dad.

There’s no mistaking that keening, high alto, though, which sounds strikingly, eerily like Neil’s.

“Well,” says Finn, cracking a smile, “I’ll take that as a compliment.”

Liam Gowing
Tags: This Is Happening