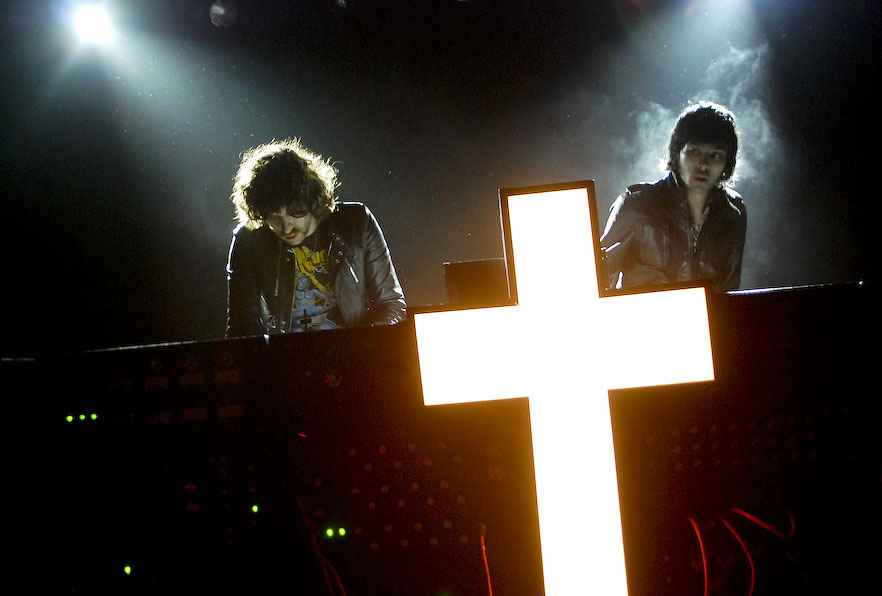 Though temperatures in Austin, TX dropped well below freezing last night (March 3), Red River was burning up as Justice launched into the opening night of the North America-spanning MySpace Music Tour on Stubb’s outdoor stage. Oblivious to the biting cold, the French duo broke out their best samples and pumped up the bass, pushing the sold out crowd into a bumping, jumping frenzy.

But before the lights dimmed and Justice began, DJ Mehdi got the show going, filling in for French shredders Fancy, and propelling the masses with a full on hip-hop assault. And by the time the slight-framed, shadowy profiles of Justice’s Gaspard Augé and Xavier de Rosnay appeared behind the tables, the crowd, clad in checkered scarves, teamster jackets, and even Spiderman onesies, were locked in a unison as each fan got their groove on to full effect.

More rave than concert, the show saw Justice tucked into a wall of speakers as their signature glowing crucifix illuminated the front of the stage. Teasing the crowd with snippets of hits like “D.A.N.C.E.,” pulled from their debut LP † (as in Option-T on your keyboard, not plus-sign), the dancefloor rockin’ pair built anticipation to an almost painful degree, making each sonic climax that much hotter. From the freezing temps of Austin to the sure to be scorching desert of Las Vegas later this spring, if last night’s searing crowd response was anything indication, Justice’s MySpace Music Tour will be blazing a trail across America. Click here for a full listing of MySpace Tour dates.

Julie Neumann
Tags: We Were There