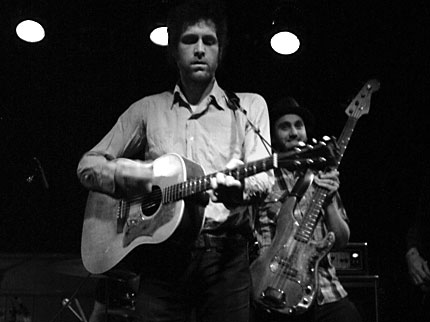 With a mellow swagger feeding the Dylan-like character decreed by countless critics, Collett and crew plucked out new tunes like “Roll on Oblivion” and “Not Over You,” the latter reeking of ol’ Bobby Zimmerman with rollicking rhythms, country-fried licks, and Collett’s forthright logic on love.

After dedications to his hometown Toronto and Tropic of Cancer author Henry Miller, Collett opted for a change of pace, booting Paso Mino from the stage to strum out a “very new” untitled track about Chicago’s Red Light District during the turn of the century. Rounded off with a handful of older tracks, including “Pavement Puddle Stars” off sophomore album Idols of Exile, the set finally concluded as hoots and hollers bounced off the venue’s walls, and some fans quizzically puzzled their city’s checkered past.

We asked: In addition to being a solo artist, Jason Collett is also a member of Canadian supergroup Broken Social Scene. If you could create a U.S. supergroup who would the members be?

Angie Maldonado
Tags: Shows in Chicago, We Were There