From David Bowie's "China Girl" to Madonna's "Justify My Love," watch the racy music videos featured in our March issue. 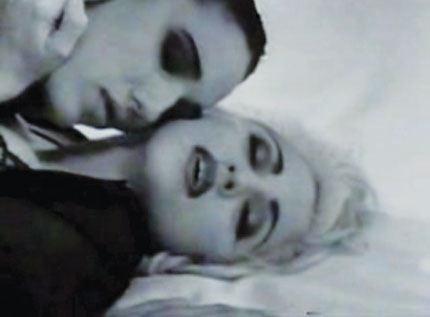 Since the birth of the music video medium, artists have pushed the envelope in both creativity and profanity. And while many of the dirtiest videos never hit the mainstream with MTV, uncensored versions are leaking to the masses thanks to the web.

From Duran Duran’s sensuous wrestling match in “Girls on Film” to Pittsburgh Slim’s strip tease in “Girls Kiss Girls,” to the Wildhearts’ gruesome S&M in “Destroy All Monsters,” watch uncensored versions of the music videos explored by Greg Milner in our March issue.

It should go without saying, but we’ll say it anyway: This isn’t safe for work, or for you young’uns out there. Viewer discretion advised.

Duran Duran, “Girls on Film” on YouTube
Topless women walk on fashion runways, wrestle in mud, play around in inflatable tubs, and flip a sumo wrestler in the ring. “Rio” was actually sexier.

David Bowie, “China Girl”
Bowie and model Geeling Ng reenact From Here to Eternity’s famous beach scene. A flash of the Thin White Duke’s bony butt keeps this one off the air.

R.E.M., “Pop Song 89″
Three topless women gyrate behind a shirtless Michael Stipe (who also directed). The MTV-approved cut has black bars over everyone’s chest. Madonna, “Justify My Love”
Madge wanders into various risqué scenarios in a hotel, including an S&M liaison, a threesome, and the application of fake mustaches. Nine Inch Nails, “Closer”
The spurting heart, the rotating pig’s head, and the emaciated naked bald woman make this Mark Romanek–directed clip more icky than titillating. Prodigy, “Smack My Bitch Up”
A hyperkinetic trip through a truly debauched evening with a surprise reveal at the end. (Spoiler alert: The bitch-smacker is a woman!) Click to page 2 for more videos that weren’t featured in our March story.

The Wildhearts, “Destroy All Monsters”