The Heavy, MGMT at Playboy’s Rock the Rabbit 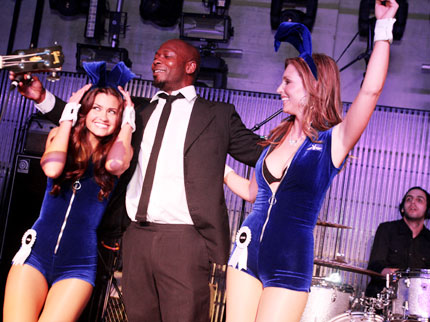 When life gives you bunnies, you do the bunny hop. At least that’s the tactic the Heavy’s frontman Kelvin Swaby employed at the Playboy party Thursday night, peppering a funk-tastically grimy set with elated proclamations about his present company. Looking like he’d just won ten lotteries while flanked by blue velvet-outfitted playmates, the Curtis Mayfield-esque leading man bumped and grinded through an electric set that included standout “That Kind of Man” and was truly heavy on the soul and the sweat. “There’s too many women in this building not to play this tune,” he purred before closing things down with the U.K. outfit’s drrrtiest tune, “Girl.”

But where the Heavy came to hop, MGMT seemed significantly less friendly to the decadent atmo. After “satisfying” the crowd’s hit thirst by playing a recording of their tune “Time to Pretend” before even taking the stage, the electro-pop outfit greeted the audience with an “ugh, this is so embarrassing” reminder to themselves: “This is MGMT. And this is a Playboy party.” Despite their apparent distaste for the scene, MGMT still delivered in full, from a downtempo take on the disco-fied “Electric Feel” to glam rock tune “Weekend Wars.”

Melissa Goldstein
Tags: We Were There