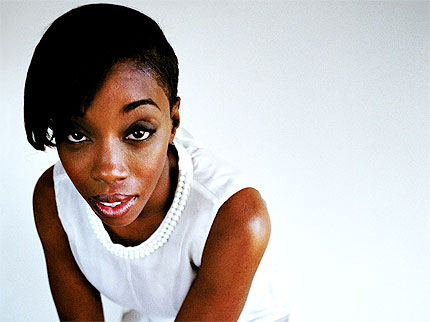 Estelle Swaray just can’t understand the pickup techniques of American men. But the recently transplanted Londoner is learning fast. “They talk so much. By the time they get your number, you forgot what their name was,” groans the chic 28-year-old, complaining about the “negging” tricks picked up in Neil Strauss’ seduction primer, The Game. “I’ve seen guys do that: ignore the girl and then insult her! It’s wack! It shows a lack of character if you can’t be original. If you irritate my soul like that, I just switch you off.”

Wise guys get their comeuppance with Estelle, who creates swinging girl-power soul, marked by virtuosic vocal chops — she’s a deft rapper and singer. (Think Lauryn Hill. Everyone else is.) She’s so impressive, in fact, that A-list help — Kanye West, Mark Ronson, and Cee-Lo Green — have lined up to chip in on her American debut, Shine, which is also the first release on John Legend’s Homeschool Records (a division of Atlantic). The deal was originally set in motion in 2002, when Estelle introduced herself to West outside a Roscoe’s House of Chicken ‘n Waffles in Los Angeles; he hooked her up with Legend in a sequence she admits was her “total blonde moment.”

“I wanted to meet John Legend, so Kanye took me to the studio,” she says. “I was talking to this guy for, like, 20 minutes, and then I asked Kanye, ‘So where’s John?’ Kanye pointed and said, ‘He’s right there. You were talking to him.’ I was like, ‘How you doing? I’m Estelle.’ So embarrassing.”

Legend ended up singing on her debut album, The 18th Day, which reached No. 35 on the U.K. charts in 2004 but wasn’t released Stateside. On Shine, she shares a sweet flirtation with West on the effervescent, disco-dusted “American Boy,” and samples 1950s R&B howler Screamin’ Jay Hawkins on the first single, “Wait a Minute (Just a Touch),” where she orders a beau to “wrap it up, ’cause I ain’t carrying your embryo.”

Estelle might sound like she’s done with the dating game, but she wants to make one thing clear: She doesn’t hate the opposite sex. “I have so many songs cursing out men,” she says. “But I was happy ‘American Boy’ made the album, because I’m saying men aren’t that bad. Let them breathe! We still need ‘em!”

Stacey Anderson
Tags: This Is Happening