Despite stringent preventative measures, Jack White and crew's new LP appears to have landed on iTunes today, albeit briefly, and is now spreading across the web. 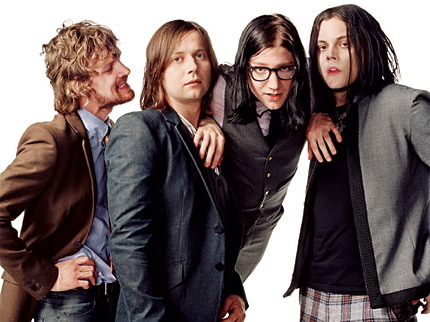 This past Monday (March 17), in an industry-shaking announcement, the Raconteurs revealed that Consolers of the Lonely, the quartet’s much-mooted sophomore LP, would drop March 25 in digital, CD, and vinyl formats via Warner — eliminating any lead time for press or marketing the album. But today (March 21), the album apparently popped up for sale on iTunes — accidentally, we assume — and now the new 14-track set, which Jack White and crew hoped would “not be defined by it’s [sic] first weeks [sic] sales, pre-release promotion, or by someone defining it FOR YOU before you get to hear it,” is now seeping across the internet.

Don’t rush to the iTunes Store, though: Consolers of the Lonely is no longer available there, but eager fans are already snagging the album over illegal file-sharing services.

SPIN.com reached a spokesperson for Apple, who could not comment at press time. We will keep you posted.